Several days ago, my wife and I celebrated my birthday, which happens to coincide with the Mexican holiday of Día de los Muertos, otherwise known to the English-speaking world as the Day of the Dead. Without a cultural anchor like Detroit’s Mexican Town, one could be forgiven for thinking “Day of the Dead” is based on an old cult horror film. Apart from its Halloween-esque appearance, Day of the Dead is in reality a festive and colorful celebration established in Mexico hundreds of years ago and observed currently in numerous countries all around the globe.

Dedicated to the remembrance of friends and relatives who have passed from this life, Dia de los Muertos is considered a mainly Mexican holiday, yet the day itself (actually November 1st and 2nd) is perhaps better known to Roman Catholics as All Saints’ Day or All Souls’ Day. For the population of Mexican Town here in southeastern Michigan, as well as other Mexican and Spanish-speaking areas around the country, this holiday provides an opportunity for family members, neighbors and others in these close-knit communities to share in the prayer and memory of those dearly departed.

A national holiday in Mexico, the tradition of Dia de los Muertos entails the creation of shrines and altars honoring the dead, on and around which offerings (“ofrenda”) 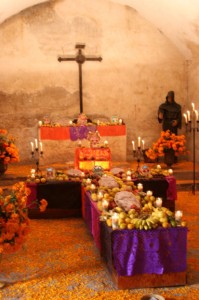 of food, drink and other items are placed. Of these presentations, there may include small sugar-based representations of skulls, as well as special loaves of bread and arrangements of marigolds. Also included are usually some of the deceased’s favorite foods, beverages and even personal articles left behind with friends and relatives. Many times, these and other offerings are brought to the deceased’s graveside as well. For our part, we enjoy the relative joyous nature of the day, which mixes a love of life with the somber memory of those who have moved on to a greater reward. Small figurines can also be found peppering the altars. The photo at the beginning of this article illustrates one type of Day of the Dead art, in this case a six-inch wide glassed-in diorama featuring a band of demon mariachi musicians. 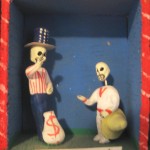 “To have an uncle such as this!”

Often one will see these small shadow boxes populated by clothed skeletons and set in what can be described as typical scenes from daily life. Many of them are humorous in nature, poking fun at the human condition, not the least of which is sex and politics, but they can also include work, play and more fantastic situations.

It has been said that the modern celebrations of Dia de los Muertos trace their roots back to the Aztec festival devoted to Mictecacihuatl, also known as the Queen of Mictlan, who according to legend ruled the underworld alongside her husband. Mictecacihuatl’s role, per the legend, was to look after the bones of the dead. She was said to preside over ancient festivals honoring and celebrating the dead, all of which eventually merged with more modern Spanish and Mexican traditions leading to the current observance of Dia de los Muertos.

Over the centuries, the holiday diffused across the globe, being adopted by numerous cultures in various geographical regions such as Spain and Brazil, as well as throughout many Asian and African countries. According to scholars, the modern day festival celebrated in Mexico originally fell within the ninth month of the Aztec calendar; those early celebrations, which were dedicated to the “Lady of the Dead,” lasted for weeks on end. The current Day of the Dead holiday is, to say the least, much more streamlined and serves to remind us that life is not just reserved for the living.