Any Baby Boomer who has spent time with a friend or loved one afflicted with the dreaded Alzheimer’s disease knows almost immediately what we are asking here: Would it be better to know that one is very likely to be affected by this horrible condition in the future, or is not knowing simply more desirable? Until recently, this has been more or less of an academic question, but a breakthrough by medical researchers at Georgetown University has brought the debate front and center.

It appears that in the not too distant future, doctors will be able to tell their patients whether or not they are at high risk for acquiring Alzheimer’s disease, one of the most feared brain disorders affecting older individuals. For Boomers and other senior citizens, this latest advance in the study of this disease may seem like a godsend, but doesn’t knowing also come with its own set of terrible, or at least, undesirable consequences? The jury is still out on that question, though many people certainly have personal opinions when it comes to knowing one’s potential fate.

According to news reports, a simple blood test may be all that is required in the future to tell whether or not a person has a predisposition for developing problems caused by Alzheimer’s, including mild dementia. Researchers at the Georgetown University School of Medicine have come up with a test that apparently can predict with 90-percent certainty whether an otherwise healthy individual will be afflicted by dementia (or mild cognitive impairment — MCI) and its life-threatening complications within three years’ time. 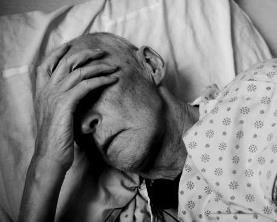 The anguish of an Alzheimer’s diagnosis can be devastating, not only to the patient, but to friends and loved ones as well.

Based on the information coming out of the prestigious medical school in Washington, D.C., in just a few years Baby Boomers and younger seniors will likely be able to have their blood tested to determine the odds of getting this debilitating and currently incurable disease.

As many people already know, Alzheimer’s is the most common type of dementia, the effects of which only worsen as the condition progresses. Sadly, for most patients the prognosis is not good. Victims often lose their memories, being unable to recognize loved ones and close relatives, as well as losing all sense of who they are or once were. The eventual outcome of this terrible affliction is death.

The specific lipid panel that Georgetown researchers came up could allow doctors to fairly accurately distinguish between two distinct groups of currently cognitively normal individuals: those people who will likely progress to MCI or Alzheimer’s within two to three years, and those who are likely to remain normal for the near future. According to the research study, the lipid panel reveals changes in the breakdown of neural cell membranes, which results in 10 identifiable metabolites that then begin circulating in a patient’s bloodstream. Two of those 10 metabolites reportedly have a strong association with the neuropathology linked to Alzheimer’s.

While Alzheimer’s disease is known to develop differently in each individual, the more common symptoms oftentimes are mistakenly attributed to the basic process of aging. The early onset of the disease can result in a person having difficulty when trying to recall recent events (also referred to as “short term memory loss”). Following the progression of the disease, doctors know that additional symptoms become more and more manifest, such as confusion, trouble with language, irritability (and sometimes aggression), as well as mood swings and longer-term memory problems. The advance of the disease soon leads to gradual loss of bodily functions, which is always fatal.

Although there is currently no known cure for Alzheimer’s, the recent discovery by scientists at Georgetown promises to help potential victims of the disease understand their future risk for getting it. Baby Boomers and seniors in their early 50s and 60s may benefit the most from this latest medical advance, and we can only hope that knowing more ahead of time will help lead to a cure, or at least increase the potential for possible treatments that might stave off the disease’s progression in the future. 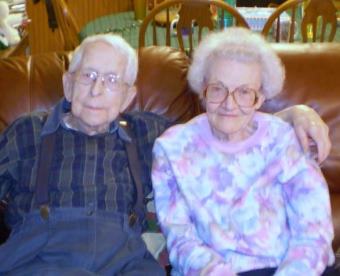 Age is the biggest risk factor. After 65, the likelihood of developing Alzheimer’s doubles every five years or so. By 85, that risk hits nearly 50 percent. Nobody yet knows why risk increases as we grow older.

News articles have described the potential new test, which relies on analyzing the levels of 10 lipids found in the human bloodstream. By measuring the amount of these key lipids, or fats, researchers were able to estimate the chances of a patient coming down with either mild cognitive impairment (such as memory loss and the marked reduction in the ability to think clearly) or the early stages of Alzheimer’s disease.

It was discovered that lower levels of those 10 specific fats in the blood acted as relatively accurate predictors of impending dementia. Dr. Howard Federoff, executive dean of the Georgetown University School of Medicine, stated that despite the recent discovery, researchers still do not understand the link between the low levels of those 10 lipids and medical science’s understanding of the pathobiology of Alzheimer’s.

Without a doubt, however, this new research will likely make predicting the early onset of the disease much easier; which could provide patients and their families more time to adjust to the future effects of the disease should they eventually come down with it. Right now, without the help of a simple blood test that checks for specific biomarkers, doctors must rely on expensive PET and MRI scans, which themselves are apparently limited in accurately diagnosing patients prior to onset of the disease.

As researchers have already noted, the use of a blood-based biomarker test would provide physicians with a very useful and economical option. Although a number of these tests are under development, more research is reportedly required, part of which also means a greater amount of investment in the area of diagnosing preclinical Alzheimer’s disease. Ultimately, though, we all hope for a cure.

As part of the Georgetown study, 525 healthy people 70 years of age or older underwent a comprehensive bloodwork exam, plus a range of neurocognitive tests. Those subjects were then followed by researchers for five years. Over the course of the study, researchers noted that 74 of the participants slipped into dementia or were otherwise affected by mild Alzheimer’s disease. By comparing the participants’ blood values, scientists found that the subjects who had developed dementia began the study with measurably lower levels of those 10 lipids.

Researchers later set up a smaller study to test the predictive power of the specific lipids. Doctors performed that study on a separate group of 40 individuals. As a result of that smaller test, Georgetown researchers were able to confirm that a simple blood test could be used to identify people who would be expected to develop mild cognitive impairment in the future. According to news reports, the lipid measuring approach was actually more accurate in determining future dementia and cognitive problems, based on the researchers’ data, than a currently used genetic test that looks for a mutant version of the “APOE” gene, which has been proven to be linked to Alzheimer’s. 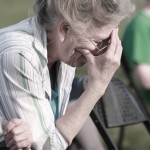 Without a cure for MCI and Alzheimer’s, Baby Boomers may be facing the dilemma of living longer while dealing with acute neurological issues as a result of that longer life.

While being able to predict who will come down with a currently incurable disease may seem to be of limited importance at the time, the ability to identify future Alzheimer’s sufferers could eventually play a very important role in finding a cure for this grave disease. In fact, Georgetown’s Federoff believes that the drugs currently available for the treatment of those already afflicted with Alzheimer’s may have some better effect on those individuals who have yet to develop symptoms. This, in addition to increasing the likelihood of improving research efforts into curing the disease, may lend hope to future generations who might be spared the awful effects of such a cruel illness.

According to the World Health Organization (WHO) the worldwide incidence of Alzheimer’s disease is expected to double every 20 years; rising from nearly 36 million sufferers in 2010 to more than 115 million people across the globe by 2050. Perhaps the Georgetown research, which may lead to the commercialization of what scientists referred to as a “preclinical disease biomarker test,” could end up becoming a large-scale screen test for at-risk individuals. Clinical trials will likely be the next step on a path to identifying those with a predisposition for Alzheimer’s, and maybe a future cure or at least therapies to delay the onset of this fatal illness.